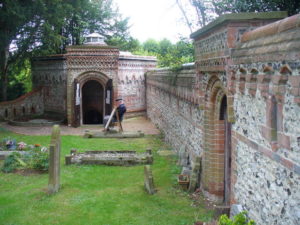 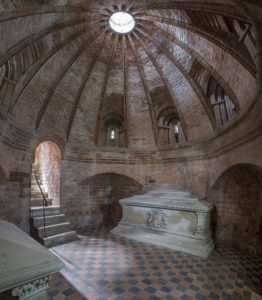 The Lovelace Mausoleum is situated in the corner of our churchyard at St Martin’s.  This unique building has an equally fascinating history.

In 1836 Ada, the daughter of Lord Byron and his wife Anne Milbanke, married William, the 8th Baron King, who was descended from a long line of landed gentry and achieved success in public life, becoming Lord Lieutenant of Surrey and acquiring the title of Lord Lovelace. He and Ada, now Countess of Lovelace, made their home at Ockham Park and had three children. Following the death of their first child, their second son, Ralph would become the Second Earl on his father’s death in 1893. Ada was an exceptionally able mathematician and in the 1840s, with Charles Babbage, developed the “Analytical Machine”, a calculator that is regarded as an early version of the modern computer. In recognition of her achievements, her portrait hangs in the Pillared Room at 10 Downing Street and a prize in her honour, the Lovelace Medal, is awarded annually on 16th October. Ada died in 1852 at the early age of 36 and is buried next to her father at the family estate, Newstead Abbey, in Nottingham.

In 1865, Lord Lovelace married Jane Crawford, a widow, whom he met during a visit to India. They came to live at Horsley Towers and had one son, Lionel, who would become the Third Earl on the death of his half- brother Ralph in 1906. During the following decades, Lord Lovelace undertook the restoration of Horsley Towers and St Martin’s Church and developed the village of East Horsley with its distinctive architectural style. He also commissioned the construction of a Mausoleum and Gazebo in the Church grounds. Lord Lovelace died in 1893. Over three hundred people attended his funeral after which his body was interred in the Mausoleum. His widow, who had placed a wreath on her late husband’s tomb, died in 1908 and her body was interred in the second tomb.

In 1908 Lionel, the Third Earl Lovelace donated a plot of land to the Church part of which was reserved for family graves. Lionel died in 1929 and, like his son Peter the Fourth Earl who died in 1964, is buried in the “Lovelace Plot.”  Peter King the Fifth Earl died, without issue, in January 2018.  For many years the Mausoleum remained unopened, neglected and almost forgotten until its restoration in 2008.

The Mausoleum is open on Heritage Day and other dates during the year.  Please contact the Parish Office for details. 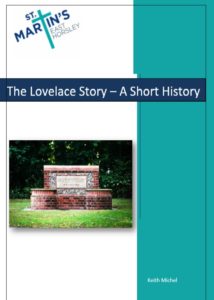